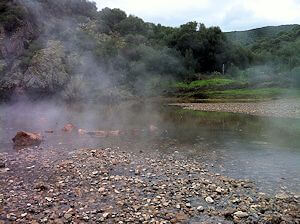 Our holiday homes and holiday apartments are located 7 miles from the spa.

Sardinia, thanks to minerals and the recent volcanism, has several thermal and mineral springs. The thermal springs, whose temperature ranges between 40 ° and 70 ° C., are aligned along major fault lines, near lava outcroppings as well as the thermal baths in Casteldoria which are located in Santa Maria Coghinas. The baths have been known since ancient times for their salt, bromine and iodine waters that flow at 70 ° exit of a wild gorge porphyritic almost at river level Coghinas.

Nearby is the castle of the Doria, founded in the twelfth century. It is located in a frame of bright red rocks and stands on a hill of 228 m. Along a path you can admire two small Romanesque churches, that of St. John, in excellent condition, and that of S. Maria delle Grazie, which has preserved its Gothic facade. 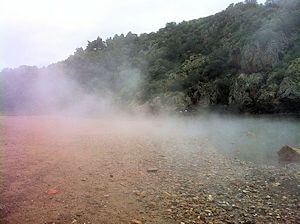 The landscape of the hills surrounding the Coghinas River is covered by lush Mediterranean vegetation, consisting mainly of ogliastri, cork and other varieties, typical of of such vegetation such as mastic, buckthorn and cistus. In the territory there are several species of mammals, such as wild boar, Sardinian fox, porcupine, weasel, marten and wild cat. For birds we note the substantial presence heron, the Sardinian partridge and osprey. The water turtle find in this place an ideal habitat for its survival ..