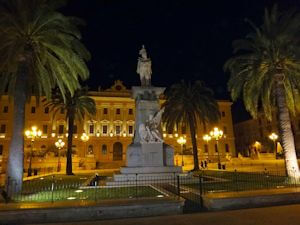 Our holiday homes and apartments are located 28 miles from Sassari. The city of Sassari was initially built on the sea, today's Porto Torres.

In fact, because of the frequent assaults by the barbarian peoples and the fear of malaria, the population then he always shifted more toward the island's interior.

The city (about 130,000 inhabitants), with its medieval old town, the cathedral, the baroque facade which shows the splendor of Spanish religiosity, is home to one of the oldest and most important Italian universities.

Details of attraction places are the archaeological museum, the craft pavilion and unforgettable folk events such as the feast of the knights "The Sardinian Cavalcade (La Cavalcata Sarda)", the second last Sunday of May and the procession of the stanchions 14 August.