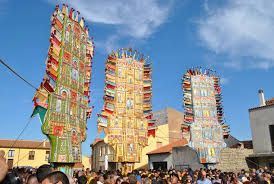 Capital of the historical region of Anglona for centuries. Its archaeological heritage boasts 78 nunulviraghes.

The historical centre of town maintains its typical traditional aspect with religious monuments and stunning typical housing dating from the 1800's.

The most important edifice is the church of the Assumption, a parish constructed in different periods from the XVI century. Inside there is a pulpit and some altars in carved wood from the XVII and XVIII centuries, and two statues of the Assumption, one of which represents the sleeping Assumption in a rich bed of golden frames.

There is also a limestone sacred well in the region. Every year on the 14th of August, the candle bearers parade candlesticks in honour of the Assumption.

Three giant candles, made of wax canes and papier mache with colourful paintings representing the shepherds, the agriculturists, and craftsmen, the three old main groups of the town’s population.